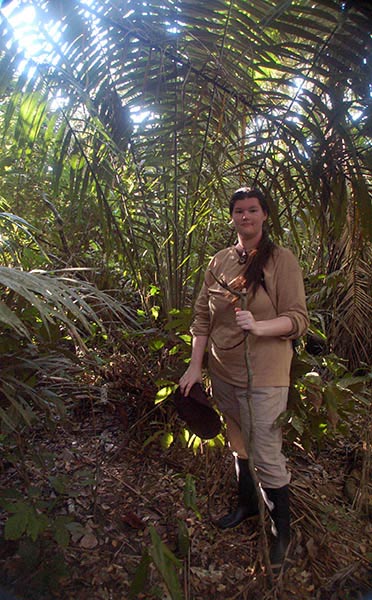 My interest in tagua started in 1998, when I was looking for a natural alternative for bone and antler in my jewelry and carving. I tried many materials, but when I found tagua, I was entranced. It is beautiful, with natural whorls of color in its satiny ivory surface - less brittle and more durable than bone, less porous and polishing up more nicely than antler.

Even better, The harvest of tagua is a wonderful way to protect endangered rainforest lands — giving people a sustainable, renewable, natural resource that provides both economic stability and an alternative to rainforest destruction. Because of its incredible likeness to animal ivory, tagua is also being used as an ivory and bone substitute — it is so similar, in fact, that it is being used for many museum and historical reproductions of elephant ivory artifacts. In one year, one tagua palm can produce as much ivory as an average female African elephant does in her lifetime. "Tagua" (Tah-gwaa) is a word that generally refers to Phytelephas aequatorialis or Phytelephas macrocarpa; a tropical palm that can grow up to thirty feet high. Tagua ranges throughout rainforest from Panama to Columbia and Ecuador to Peru. It tends to grow in swampy areas, as well as in clumps, shaded by the canopy of much larger trees.

I was thrilled to visit Peru in 2010 and go hunting for natural, wild growing tagua palms in the rainforests of Manu. Once I knew what to look for, I realized that it was growing just about everywhere, and it was so exciting to be surrounded by the nuts that I use every day in their native setting. The local people there called tagua 'yarina'. The word 'Tagua' is generally used to refer to the palm's nut; it is also called called palm ivory, vegetable ivory, corozzo (Britain), coquilla (Brazil), palmivoor (Colombia), steinnuss (Germany) and binroji (Japan).

The nuts themselves range from about one to two inches in diameter, and are made of pure cellulose. Tagua nuts grow in a clublike sheath in bundles, with a single tree able to produce hundreds of nuts in a year. When they are just picked, the 'nut' is in liquid form. We cracked one open and drank the tagua, it was slightly sweet and very watery, vaguely reminiscent of coconut water. When the nuts just begin to dry, they are gel-like and edible, often being mixed with fruit and made into a jellylike spread. When the nuts dry (a process that takes a few weeks to a few months, depending on weather conditions), they turn rock hard. The tagua itself is very dense, close-grained, and durable.

When researching the material, I found out many interesting tidbits about its history and uses. Before the use of modern plastics, tagua was a very common and popular material. Historically, it was used to make buttons, dominos, chess pieces, netsukes (Japanese carvings), dice, and many other small items. In the 1920's. 20 % of all the buttons produced in the U.S. were made of tagua, and almost 5 million dollars worth of tagua was exported into the U.S. and Europe every year. In modern day, tagua has fallen out of use for almost all manufacturing applications, but is becoming increasingly popular among craftsman and artisans alike. 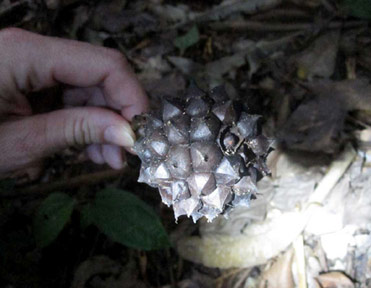 I am really happy to be able to spread awareness and appreciation of tagua, as well as encourage the market for this naturally renewable rainforest resource through my artwork. Thank you for your interest in tagua, I hope that you come to love it as much as I do! 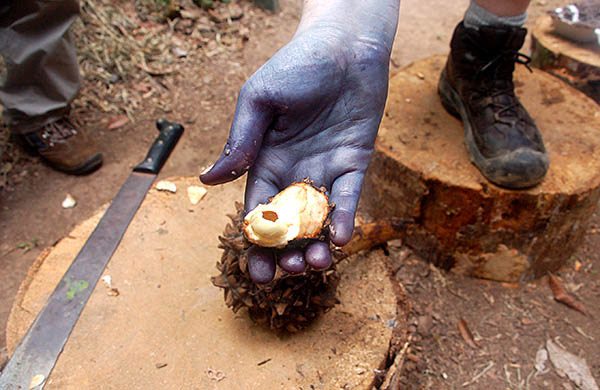 Tagua is a very hard, durable substance, but it is sensitive to water. My tagua pendants have been coated in a clear protective varnish, but are NOT water-safe. Do not take your pendant into the shower or a swimming pool. Water will not destroy the tagua, but it will corrode the design and can possibly cause the pendant itself to warp or crack, if submerged for long enough.

Tagua 'antiques' a bit over time, often turning a rich yellow-ivory color with age. This is normal! Some pendants stay snow white and some turn a rich, dark ivory — each tagua slice is unique.

Tagua can be polished by hand with natural waxes (beeswax works well for this) and buffed to a shine. Generally this only needs to be done once a year at most, and can make an older pendant look brand new!

Back to tagua pendants.