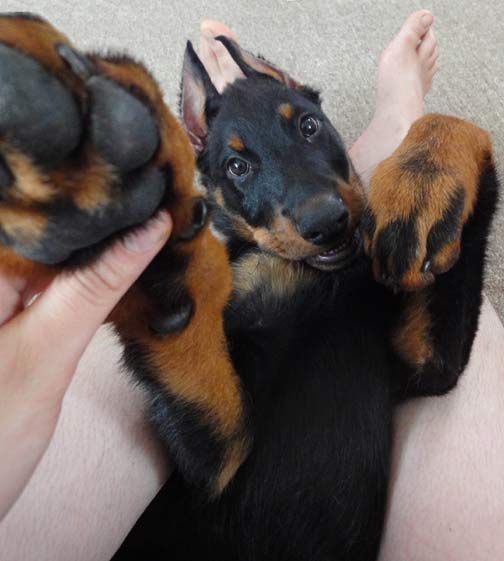 Marrok, or Rocky, as he is affectionately known, is a beauceron. The beauceron (also known as the French Shepherd, Berger de Beauce, or Bas Rouge) is a large dog bred primarily for herding and guard work. Though popular in its home country, the beauceron is a rare breed in the United States. This large, intelligent breed has been known for hundreds of years in Europe and is one of the original ancestors of the doberman pinscher. One of the most notable traits of the breed is a set of double dewclaws on each hind foot.

Marrok joined our family at eight weeks of age. He was the best puppy I've ever had the pleasure of working with - smart, affectionate, quirky, and eager to learn. As an adult he is an incredible dog, full of personality and humor! He's an absolute sweetheart and a good guard dog for both the house and farm, though his favorite place if he's not our running a mile a minute is to be asleep on the couch or on top of the A/C vent.

Marrok was bred by Kim Phillips in Idaho. You can visit her site at: VanDer Moor-Hond Kennels