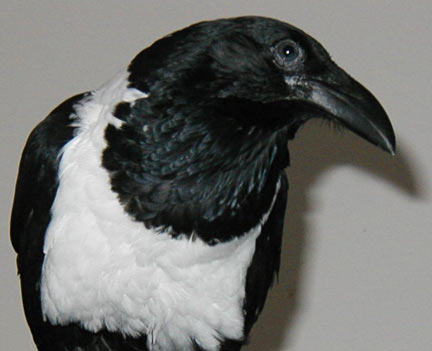 Zen is a pied crow (corvus albus), a corvid species native to Africa. She was captive bred, hand-raised, and joined our flock at six weeks of age in June of 2004. She is large, intelligent, crafty, sensitive, inquisitive, and very sneaky.

Corvid species native to the United States are illegal to keep in the U.S. The laws regarding this are very strict, and even many zoos and legitimate wildlife rehabilitation organizations have a hard time obtaining the necessary permits.

Exotic (non-native) corvid species are a legal option, but are expensive, need a LOT of space and are a huge time commitment. They do not make good 'pets'.

Zen was sexed through DNA testing, and we are sure she is a female. True to her corvid nature, she eats just about anything. Her base diet is a high quality dry dog food, supplemented with fruits, vegetables, pasta, meat, eggs, and pretty much whatever else we are eating (that isn't too fatty or salty, that is). One of her favorite treats is salsa, the spicier the better!

Zen lives in a spacious flight cage filled with lots of toys and different perches. Though she stays in a cage when she can't be supervised, she is out most of the time.

Zen plays with pretty much everything. She is very destructive (her favorite game is shred-n-tear) and messy. She loves to find ways to throw her food and water all over anything and anyone within reach. She can take apart just about anything and loves to undo screws and locks. She is a fair mimic, though she isn't an avid talker just yet (she is still very young).

Zen is free-flying, meaning her wings are not clipped and she can fly around the house at will when outside her cage. You may notice green things on her legs in some of the pictures, those are called jesses. Similar to those used in falconry, a leash can be attached to jesses to secure her when outside or in unfamilar settings. Zen also wears a special bird harness, which replace the jesses in most situations. Though Zen came to me jess trained as a baby, I don't recommend the use of jesses in most situations with corvids - their legs are not strong like a bird of prey and unintentional injury would be far too easy with these birds. Unlike parrots, crows do not use their beaks to climb, and have a very hard time getting around without flight.

Seven was rehomed to me in 2007, he is about the same age as Zen though unrelated. He's a sassy boy, but he's grown into a really wonderful, funny addition to our family. 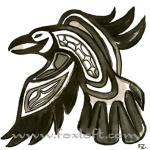